TEHRAN (defapress)- Iranian Judiciary Chief Ebrahim Rayeesi said that his country’s armed forces have proved their capability and competence in countering a military superpower like the US, cautioning that any move that poses threat to the Islamic Republic will be vehemently responded.
News ID: 80153 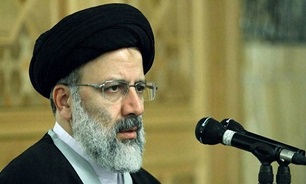 Speaking during a joint armed forces ceremony at an Iranian airbase in the Southwestern Bushehr province on Friday, Rayeesi warned that if the Americans "seek measures in the Persian Gulf that in any way signal an attack or a threatening and destabilizing action... our powerful armed forces will force them to surrender or to find themselves at the depths of the Persian Gulf".

The official highlighted that the Persian Gulf has to remain secure for Iran "at all times".

The judiciary chief noted that Iran's military is regarded around the world as a self-sufficient and competent force which has proven itself in cases such as the downing of the US RQ-4A Global Hawk spy drone last June.

Rayeesi added that Iran's military and advisory presence in the region has also served as a bulwark against US and European plots in the region.

"Today, not only in Iran, but people across the region feel secure due to our presence and our support against the American aggression," he added.

Earlier last year, Washington called for the formation of a so-called maritime coalition in response to a series of mysterious explosions targeting vessels in the Persian Gulf and the Sea of Oman.

Washington, which was quick to blame Iran for the incidents without providing conclusive evidence, has since deployed thousands of additional troops and millions of dollars worth of military equipment in certain regional states.

A number of European states, such as France and Britain, have announced plans for future naval deployments in the region.

Iran, which has soundly rejected the provocative foreign deployments, has stressed that only regional cooperation can ensure security in the Persian Gulf and the Middle East.

Tensions have since further increased after Washington assassinated top Iranian commander, Lieutenant General Qassem Soleimani, during an official visit to Iraq on January 3.

Iran retaliated a few days later, launching a volley of ballistic missiles at the Ain al-Assad airbase and another US-occupied outpost in Erbil, the capital of the semi-autonomous Iraqi Kurdistan.

The Trump administration, which had initially vowed a severe response to any Iranian retaliation, sought to play down the attack and claimed that its forces had suffered no casualties in the attack.

The Pentagon has since, however, gradually revealed figures of troops which have suffered "brain injuries" in the Iranian attack.

Earlier this week, the Associated Press reported what it described as an "uneasy quiet" for US forces following Iran's missile strikes.

The report cited US Central Command commander General Frank McKenzie saying that Washington is uncertain how future events may unfold in the Middle East and that Washington needs to accumulate "military might" in the region as it fears possible confrontation with Iran.

The report described how McKenzie has requested a "much larger than usual naval presence" in the region, shifting naval assets from other locations to the Middle east despite the US Navy's need to deploy against naval powers such as Russia and China.

According to observers, Iran's rare and direct attack against US bases last month served to showcase part of Tehran's military capability to counter US military presence in the region.

Many US politicians and officials have also slammed the Trump administration for putting US troops in danger and entangling the US in another military quagmire in the region.

In December, Commander of the Islamic Revolution Guards Corps (IRGC) Navy Rear Admiral Alireza Tangsiri stressed that all vessels voyaging in the Persian Gulf are monitored by the Iranian naval forces, adding that the trans-regional states endanger the security of the region.

"The IRGC Navy controls and monitors the foreign vessels which enter the Persian Gulf and questions them about their nationality, type of the vessel and their destination, and all vessels belonging to different states, including the US, have always responded to the IRGC Navy's [control] questions," Rear Admiral Tangsiri said.

"The presence of trans-regional countries endangers the region but our message is that peace and friendship in the region are established only by the regional states," he added.

Rear Admiral Tangsiri, meantime, said that deployment of the Iranian vessels in the Persian Gulf and the waters beyond the region brings the message of peace and friendship to the neighboring states.

Rear Admiral Tangsiri had also warned in August that deployment of foreign warships and submarines equipped with nuclear propulsion systems posed a danger to the safety of the regional people's drinking water.

"The Persian Gulf covers an area of 250,000km and is an enclosed gulf. If one of these warships or submarines which are powered by nuclear fuel faces a problem, the countries on the Southern rims of the Persian Gulf and our Muslim neighbors which use desalination systems will have no water to drink and if an accident happens in the Persian Gulf, they will die of thirst," Rear Admiral Tangsiri said, addressing a forum in Tehran.

He described the presence of trans-regional states in the region as a source of insecurity and instability, stressing that the Iranian Naval forces and the IRGC Navy have established security in the Persian Gulf, the Sea of Oman and the Indian Ocean.