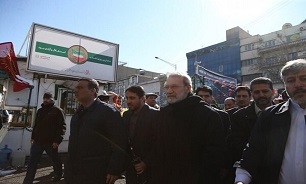 Speaking among reporters on Feb. 11 rally on Tue., Larijani said, “massive participation of people on Bahman 22 [Feb. 11] rally was the best power that was shown to the US and they [US] should know that they must obey the demands of the Iranian nation.”

Huge participation of people on Feb. 11 rally will empower the Iranian nation to continue the movement of Revolution forwards, he highlighted.

Iran is now facing a malignant enemy which does not act logically, he said, adding, “we must show our power and strength to US, so, huge participation of people on Feb. 11 rally is the best power that can be shown to American authorities.”

He seized this opportunity to express his thanks to the noble nation of Islamic Iran who took part in the nationwide rally.

He then pointed to the upcoming parliamentary election in the country and added, “surely, people will participate in the election massively and will thwart conspiracies waged by enemies against the country.”