TEHRAN (defapress) – Syrian soldiers continued their operations against terrorists on Monday, managing to retake the key town of Saraqeb in Idlib after severely hitting their positions and fortification lines.
News ID: 80385 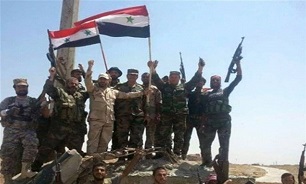 According to Syrian media, the army troops recaptured Saraqeb in northwestern Syria after inflicting major losses on the terrorists, who receive direct military support from Turkish forces, and are provided with various kinds of artillery rounds, rockets and unmanned aerial vehicles.

The reports added that the Syrian forces are now busy clearing the regained area of the remaining terrorists holed up in parts of the town.

Syrian forces are advancing against foreign-backed Takfiri militants in Idlib, tightening the noose around the extremists in their last major stronghold.