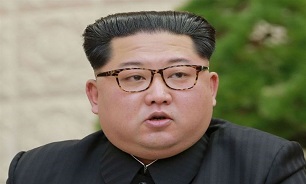 The report by the Korean Central News Agency came a day after South Korea’s military detected what appeared to be two short-range ballistic launches of projectiles that landed in the North’s eastern sea.

Kim smiled widely while watching from an observation post. He wore a black fur hat and leather coat but was not wearing a face mask, though other military officials had black masks in an apparent reflection of the country's campaign against the coronavirus.

Analysts have speculated North Korea reduced training and other activities with large troop gatherings to reduce the chance of the virus spreading in its military. North Korea has not revealed if it has any cases of the illness, though state media has hinted at some people being quarantined while showing symptoms.

KCNA said of the drill that North Korean troops “proudly demonstrated” accurate marksmanship with their long-range artillery pieces, but it didn’t further specify the weapons involved.

“(Kim) expressed great satisfaction with the fact that the artillerymen are prepared to make rapid reaction to any circumstances and perfectly carry out their firepower combat duties,” the agency said, AP reported.

“Saying that the victory of the socialist cause is guaranteed by the powerful military force and a war deterrence, he said that the People's Army should keep full combat-readiness to protect the sky, land and sea of the country from any encroachment.”

The report did not mention any direct comments by Kim toward the United States or South Korea.

Since the collapse of a second summit last year between Kim Jong Un and US President Donald Trump, North Korea resumed ballistic activity and weapons launches to expand its military capabilities. Kim had entered the New Year vowing to bolster North Korean nuclear deterrent in the face of “gangster-like” US sanctions and pressure.