Iran, Japan, UNIDO to coop. in fisheries industry in Chabahar

TEHRAN (defapress) – Iran, Japan and the United Nations Industrial Development Organization (UNIDO) will cooperate with each other in the expansion of the fisheries industry in Chabahar.
News ID: 80504 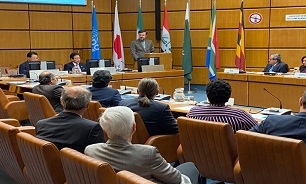 For this purpose, a cooperation agreement for five joint projects was inked between Iran, Japan and United Nations Industrial Development Organization (UNIDO) in Austria’s capital Vienna on Fri. in the presence of director-general of UNIDO, ambassadors and permanent representatives of Japan, Iraq, Iran, Pakistan, South Africa, and Uganda.

Under the agreement, the start of the 3rd phase of expansion of the fisheries industry, valued at €180,000, has been defined between Iran, Japan, and UNIDO.

Earlier, phases one and two of this project, valued at €680,000, were finished, the total amount of which had been funded by the Japanese government.

In this ceremony, Iran’s permanent representative to Vienna-based International Organizations Kazem Gharibabadi pointed to the strategic status of Chabahar and described this port as a center of developing the eastern part of the country through the expansion of transit routes between countries in the Northern Indian Ocean and Central Asia.

He also emphasized the importance of international cooperation for sustainable development of countries and countering the challenges facing economic development through the exchange of knowledge, transfer of technology and capacity building as well as removal of restrictions and illegal sanctions in this field.