Eid al-Fitr prayers to be held all across Iran

TEHRAN (defapress) – Iranian President Hassan Rouhani announced on Saturday that the Eid al-Fitr prayers (on May 24) will be held in all mosques across the country by observing health protocols.
News ID: 81121 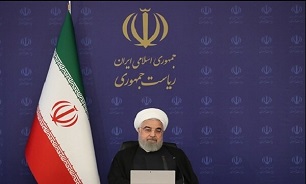 Making the remarks in a meeting of the National Committee on Combating Coronavirus, Rouhani also informed that Quds Day rallies, which are held on the last Friday of Ramadan internationally (this year falls on May 22), will be held in cities recognized as being in white conditions, and in major cities including Tehran protestors will observe the event riding their personal cars.

As he added IRGC is to take the responsibility of holding Quds days rallies in Tehran.

Rouhani noted that Iran has passed the main climax of the coronavirus outbreak but the conditions are not normal yet.

According to him, Iranian universities will be reopened from June 6.

Tehran Governor-General Anoushirvan Mohseni-Bandpei announced on May 12 that the Eid al-Fitr (fasting feast) prayers will be held in the Iranian capital in case the National Committee on Combating Coronavirus issues the permit.

According to the announcement made by the Head of Islamic Development Organization Hojatoeslam Mohammad Ghomi, all mosques across Iran have been re-opened preserving health protocols under the coronavirus pandemic as of March 12.

As Ghomi informed, the decision for re-opening of the mosques have been made due to the request of Iranian people and following the held talks with officials of the Iranian health ministry due to the order of the Leader of the Islamic Revolution Ayatollah Seyyed Ali Khamenei about holding the religious ceremonies on the upcoming Laylat al-Qadr nights in Ramadan.

Iran is incrementally reopening its religious places for holding religious ceremonies during Ramadan.