TEHRAN (defapress) - The Scottish Parliament has called for the immediate suspension of exports of riot gear, tear gas and rubber bullets to the United States, in light of the police response to the ongoing anti-racism protests.
News ID: 81305 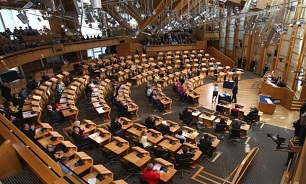 A successful motion, which was backed by 52 votes to 0 with 11 abstentions, says the parliament "stands in solidarity with the Black Lives Matter movement and considers that the UK government must immediately suspend all export licences for tear gas, rubber bullets and riot gear to the US", Independent reported.

Patrick Harvie, the Green MSP who proposed the successful amendment, said the "weapons of oppression", which the UK government has granted active export licenses for, were being used by a "racist state" to "brutalize marginalize communities".

The same motion also called for the establishment of a slavery museum in Scotland "to address our historic links with the slave trade".

The police response to the US protests has seen security forces ramming crowds with cars, deploying teargas and baton rounds against peaceful demonstrators, and arresting and shooting at domestic and international journalists covering events.

"The Black Lives Matter movement has been inspiring and it needs to be heard right around the world: that racism exists in this country as well.

"I'm delighted that today the Scottish Parliament agreed a Green amendment in an anti-racism debate calling for an establishment of a Museum of Slavery to really shine a light on this country's grim past connections with slavery and how the inequality of that history perpetuates even now.

"But our amendment also called for an immediate halt of UK exports of tear gas, rubber bullets, and riots gear to the US. Those weapons of oppression are being used by a racist state and it is unacceptable for us to be exporting them, putting those weapons into the hands of people who will brutalize marginalized communities. It's important that we stand in solidarity with the Black Lives Matter Movement."

Government export license records show that the US is one of the world’s largest buyers of UK arms, with almost £6bn worth licensed for export since 2010.