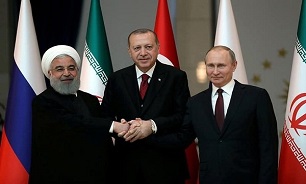 Mousavi noted that while it was scheduled to hold the trilateral meeting in Tehran, there has been a change of plan due to the outbreak of the novel coronavirus.

“So, we will have an upcoming video-conference meeting between the guarantors of Astana peace process, the exact date of which will be set during Foreign Minister Mohammad Javad Zarif’s current visit to Turkey and Russia,” the spokesman added at his weekly press conference on Monday.

He noted that the Islamic Republic is ready to host the guarantors in Tehran as soon as the situation on the pandemic alleviates.

The top diplomat will leave Ankara later today to visit Moscow in continuation of the diplomatic talks with regional partners.

Following his trip to Syria in April, this is Zarif’s second foreign visit after the first wave of coronavirus.

Iran, Russia and Turkey, as guarantors of the Astana Process, are working to reinforce the Syrian-Syrian dialogue and let Syrians decide their future by establishing de-escalation zones, forming a constitutional committee, and following up on the dialogue process and national reconciliation.

Earlier in April, the three countries emphasized the need to continue consultations and coordination among the three guarantors of the Astana process as the most effective format for the settlement of the crisis in Syria.