TEHRAN (defapress) – Speaker of the Iranian Parliament Mohammad Baqer Qalibaf slammed the illegitimate claims that the International Atomic Energy Agency’s Board of Governors has raised against Iran in a recent resolution.
News ID: 81387 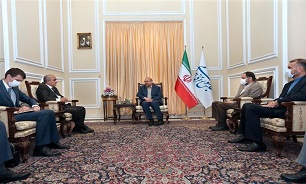 “The claims raised in the IAEA resolution are not legal, and Russia also adopted a decisive stance on it,” Qalibaf said in a meeting with Russian Ambassador Levan Jagarian in Tehran on Monday.

The speaker also called for the expansion of parliamentary ties between Tehran and Moscow, saying the next meeting of Supreme Commission of Cooperation between the Russian Duma and the Iranian Parliament should pursue efforts to promote economic interaction.

Qalibaf also hailed the consultations between Tehran and Moscow for the settlement of the crisis in Syria, reiterating that the Syrian conflict would be resolved only politically.

For his part, the Russian envoy said the anti-Iran allegations in the recent IAEA resolution were in contravention of law, saying, “Support for Iran from Russia and the friendly state of China in this regard will continue.”

Speaking at a press conference on Monday, Russia’s Foreign Ministry spokeswoman said the recent adoption of an anti-Iran resolution by the Board of Governors of the IAEA is inconsistent with claims by the three European signatories to the JCPOA that they are committed to their obligations under the accord.

“Reassurances of British, German and French colleagues that they are committed to the Joint Comprehensive Plan of Action (JCPOA) and looking for ways to minimize the negative effect of American sanctions against Iran run counter to their actions to heighten tensions surrounding the Iranian nuclear program at the IAEA as well as speculations about triggering the dispute resolution mechanism under article 36 of the JCPOA,” Maria Zakharova said.

“The adoption of IAEA Board of Governors resolution on Iran was not dictated by the reality of applying guarantees in Iran,” she added.