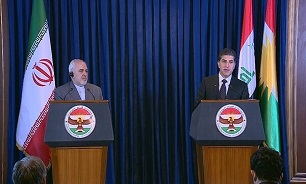 “The Iraqi people will never forget the Islamic Republic’s assistance to Iraq and the Kurdistan Region,” Barzani said in a joint press conference with Iranian Foreign Minister Mohammad Javad Zarif in Erbil on Sunday evening.

He also expressed gratitude to Iran for its efforts in maintaining stability in the region.

"Iran is an important neighbor of Iraq, the Kurdistan Region, and regional power," Barzani said.

Referring to his meeting with Zarif earlier in the day, Barzani said, "We discussed the political situation in the region and also the impact of the coronavirus on the activities of both sides."

Barzani also thanked the Iranian Ambassador to Baghdad Iraj Masjedi and the Consul General in the Kurdistan Region for their continuous efforts to improve relations between Erbil and Tehran.

Zarif, for his part, stressed that the Iraqi Kurdistan Region and Iraq are important for Iran, adding that Iran has always wanted to develop relations and cooperation with Iraq.

The Foreign Minister of the Islamic Republic of Iran referred to the friendly relations between the two countries and added that Iran seeks to develop relations with Iraq in all fields, especially in the energy sector.

Zarif visited Baghdad on Sunday morning at the head of a political delegation and left Baghdad for Erbil, the capital of the Kurdistan Region, after meeting with Iraqi officials.

The Iranian diplomat left Erbil for Tehran later on Sunday.