No Signs Trump Has Pandemic Plan despite Warnings

TEHRAN (defapress) - Donald Trump's top government experts now say that the pandemic is entering a new phase as it invades the rural heartland -- and they can't say how long it will last.
News ID: 81709 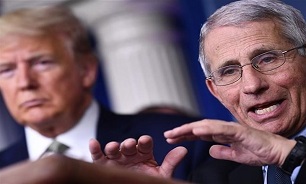 With millions of kids nowhere near going back to school and the economy reeling from a 32.9% annualized contraction in the second quarter، the months ahead are stretching into what looks like an endless crisis as Trump tweets "Make America Great Again" and spends his weekends on the golf course.

Top administration officials in recent days have repeatedly delivered information and warnings that directly contradict Trump's upbeat messaging on Friday on the virus: "We'll get rid of it، we'll beat it، and it will be soon."

Amid this grim outlook، the administration and Capitol Hill Democrats are deadlocked on a plan to extend federal unemployment payments to millions of Americans who lost their jobs in lockdowns.

Dr. Deborah Birx delivered a series of stunning warnings on CNN's "State of the Union" five months into a pandemic that the President once said posed no threat to Americans but has now killed more than 150،000 of them.

"What we are seeing today is different from March and April. It is extraordinarily widespread. It's into the rural as equal urban areas،" Birx، the White House coronavirus task force coordinator، told CNN's Dana Bash.

Birx even suggested that some Americans in multi-generational families should start wearing masks in their home and assume that they already have the disease. She did not reject a warning by former Federal Drug Administration Commissioner Dr. Scott Gottlieb that there could be 300،000 coronavirus deaths by the end of the year، saying، "Anything is possible."

"To everybody who lives in a rural area، you are not immune or protected from this virus،" Birx said. Her comments came after her colleague، Dr. Anthony Fauci، told a House committee on Friday it was "unclear" how long the crisis will last. But the US Centers for Disease Control and Prevention told Americans to brace for an average of 1،000 deaths a day for the next 30 days.

And while there are some signs that infections have plateaued in sunbelt states in the last week، albeit at high levels، Birx's words suggest new epicenters are looming، a situation hardly consistent with Trump's description of "embers" of infection. The President speaks optimistically about a coming vaccination -- though experts say it could still be months away -- and boasts about advances in therapeutics and of building thousands of ventilators. But the horrible statistics of the pandemic are relentless with 1،000 Americans dying almost every day. And the administration response appears -- as it has from the start -- short of the scale needed to beat back the worst public health crisis in 100 years.

With a vaccine still lacking، Birx also warned that too many Americans were not taking the virus sufficiently seriously، in another jarring disconnect from the President's messaging.

"Across America right now، people are on the move ... As I traveled around the country، I saw all of America moving. I think it's our job، as public health officials، to be able to get a message to each American that says، if you have chosen to go on vacation into a hot spot، you really need to come back and protect those with comorbidities and assume you're infected."

Despite the worsening crisis، there is no sign of a new administration approach، or evidence of an effort to set up the massive testing and tracing nationwide program that experts say is needed to finally get a handle on the crisis.

But surprisingly، Birx said the administration had already re-examined its approach.

"I think the federal government reset about five to six weeks ago when we saw this starting to happen across the South،" she told Bash.

At the start of a rough six-week period that saw the virus surge unimpeded through Florida، Texas، Arizona and other states that Trump pressured to open before the pathogen was under control، Vice President Mike Pence، who heads the coronavirus task force، declared in a Wall Street Journal op-ed that the US is "winning the fight" and there "isn't a 'second wave.'"

Birx has faced criticism for becoming too compliant with the administration's political line rather than following the science where it leads.

Birx defended herself on "State of the Union" after House Speaker Nancy Pelosi said she didn't have confidence in the veteran public health official because she was an appointee of a President who is spreading disinformation.

"I have never been called Pollyannish or non-scientific or non-data-driven،" Birx said on "State of the Union."

Birx contradicted the President's call for schools to open everywhere، saying that where there is a high caseload and active community spread، where people shouldn't go to bars or have house parties، they should "distance-learn at this moment so we can get this epidemic under control."

Another senior administration official involved in the fight against the pandemic، testing Czar Adm. Brett Giroir، contradicted the President's fresh touting of hydroxychloroquine last week as a potential treatment for Covid-19.

"At this point in time، there's been five randomized controlled، placebo controlled trials، that do not show any benefit to hydroxychloroquine،" Giroir said on NBC News' "Meet the Press."

"I think most physicians and prescribers are evidence-based and they're not influenced by whatever is on Twitter or anything else،" he said. "And the evidence just doesn't show that hydroxychloroquine is effective right now."

Far from showing that he understand the depths of the calamity and has a plan to address it، Trump spent the weekend spreading lies and disinformation in between two trips to his golf course in Virginia، again underscoring how he has declined to adopt the leadership role that would have been expected from a traditional president during a grave national crisis.

He again falsely claimed that the only reason there are more cases of the virus is because the US is doing new testing. He gloated about "Big China Virus breakouts" in nations where reopening have caused viral spikes and where leaders did a better job in quelling the virus than he did in the United States. Trump also claimed falsely that the media was not reporting on such hotspots around the world.

The President also launched a new attack on Fauci، who said last week that the reason Europe did better containing the initial pandemic was because it shut down far more of its economy that the President allowed in the US.

Trump's tweets followed a report by Vanity Fair last week that Trump's son-in-law and senior adviser Jared Kushner worked on a secret national testing plan last spring before the approach was rejected، reportedly for political reasons، in favor of putting the responsibility for fighting the virus on individual governors. Since then، tens of thousands of Americans have died and experts say there still is not sufficient testing capacity to flatten the infection curve of the virus. Many test results are coming back far too slowly to be of any use controlling the spread of the disease. The White House says the premise of the article is wrong and misstates the facts.

Hopes that a new coronavirus stimulus program could soon come to the rescue of millions of Americans who rely on federal unemployment payments to pay for food and rent were dashed as both sides in the talks dug in on Sunday.

Pelosi، Treasury Secretary Steven Mnuchin and White House Chief of Staff Mark Meadows are due to meet for further talks on Monday.

Pelosi rejected the administration's argument that the $600 unemployment benefit was stopping Americans from returning to work but did not specifically say it was a deal breaker.

"The $600 is essential. It's essential for America's working families. And، again، to condescend، to disrespect their motivation is so amazing ... how insistent the Republicans are about a working family and their $600 and how cavalier they are about other money that is going out،" the speaker said.

Mnuchin argued that the White House had proposed a one-week unemployment benefit extension of $600 as negotiations continued، but had been rebuffed by Democrats. Without giving details، the Treasury secretary also said he and Meadows made "three or four" other offers to the Democrats to deal with enhanced unemployment.

Senate Minority Leader Chuck Schumer said Sunday that while "good progress" was made in the talks between the White House and Democrats، they are "not close" to an agreement yet.