Sacrilege of Islam Prophet Means Violation of Freedom of Expression

TEHRAN (defapress)- Iran’s Judiciary Chief Seyed Ebrahim Rayeesi lashed out at the recent blasphemous moves in the West against the Islamic sanctities, saying that sacrilege of Islam Prophet (PBUH) is violence against freedom of expression.
News ID: 81985 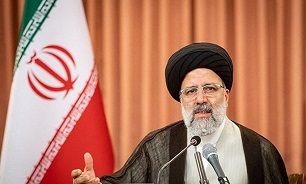 He added that sacrilege of Islam Prophet (PBUH) indicates the climax of anger of the enemies of Islam at the depth of the spiritual influence of this divine religion on the lives of human beings around the world.

Rayeesi also blasted French officials, specially President Emanuel Macron, for trying to justify blasphemy against the Islamic sanctities under the pretext of freedom of expression.

In relevant remarks on Monday, Rayeesi had expressed regret and condemned sacrilege of Islamic sanctities in certain European states concurrent with the UAE’s normalization of ties with Israel, and said, “They are part of a precise scenario compiled in a thinking chamber."

He warned that the West and Israel want to damage Islam’s power and might in the world, saying that such devilish acts will instead increase public hate for their plotters.

Also, on Tuesday, Supreme Leader of the Islamic Revolution Ayatollah Seyed Ali Khamenei in a statement on Tuesday condemned the blasphemous acts against the holy Quran and Great Prophet of Islam (PBUH), warning that they are aimed at derailing attention from the plots hatched by the US and the Zionists against the region.