TEHRAN (defapress)- US sanctions against three Russians for alleged attempts to influence the election process in the United States are aimed at exacerbating tensions in bilateral relations, Russian Foreign Ministry Spokeswoman commented on Washington’s introduction of new restrictive measures during her regular press briefing.
News ID: 82003 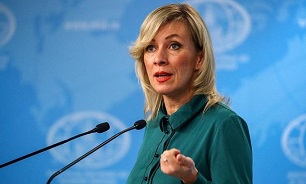 "Washington demonstrates the intention to follow a policy of further worsening of bilateral relations. This is regrettable. Anyway, it looks like a conscious choice of those who shape US policies on the Russian track," Maria Zakharova said, TASS reported.

She remarked that such actions would not bring about the effects Washington expected.

"I repeat that Washington won’t achieve the desired results through such actions. In fact, the already dim prospects of a relative improvement in our relations have been clouded further," she added.

Moscow has never interfered in election processes in the US and other countries and has no plans to do it, the diplomat reiterated.

"I would like to remind our American colleagues that Russia has never interfered and has no plans to interfere in election processes in the US and other countries," she pointed out.

"We have repeatedly called on the Americans to discuss and resolve all related issues in a calm and non-politicized manner, through respectful dialogue. However, there is no response," Zakharova added.

According to her, the sanctions that Washington has introduced, citing election meddling, indicate the United States’ "intention to pursue its usual policy of accusing Russians of some undesirable actions that the US authorities attribute to Russia’s Internet Research Agency."

"Tiresome rumors continue to spread about attempts to undermine US democracy," she added.