Erdogan Tells Merkel European States Should Be Fair in E.Med 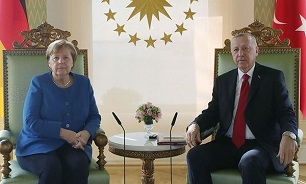 According to a statement by the Turkish Communications Directorate, the two leaders also discussed bilateral and regional issues, Anadolu news agency reported.

During the meeting, Erdogan told Merkel that European states should be fair and consistent on the issue of Eastern Mediterranean.

He stated that disputes could be resolved through negotiation as long as there is a fair approach to the Eastern Mediterranean.

Erdogan stressed that Turkey would continue to pursue active policy on the country’s own rights.

Greece has disputed Turkey’s energy exploration in the region, trying to box in Turkish maritime territory based on small islands near the Turkish coast.

Turkey --- the country with the longest coastline in the Mediterranean --- has sent out drill ships to explore for energy reserves on its continental shelf, saying that both Turkey and the Turkish Republic of Northern Cyprus (TRNC) have rights in the region.

In order to reduce tensions, Turkey has called for dialogue to ensure the fair sharing of resources.

The EU also called for negotiations between the parties. EU leaders will discuss the conflict as well as the bloc’s relations with Turkey during their extraordinary summit in Brussels on September 24-25.

In order to prepare for the leaders’ meeting, the European Parliament will adopt a resolution on the topic this week.