TEHRAN (defapress)- A US convoy of 60 trucks, loaded with military and logistic reinforcement, arrived in Syria’s Northeastern province of Hasaka.
News ID: 82087 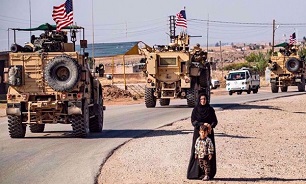 The convoy, coming from Iraq, was heading toward bases run by the US military in the oil-rich province.

Since late October 2019, the United States has been redeploying troops to the oilfields controlled by Kurdish forces in Eastern Syria, in a reversal of President Donald Trump’s earlier order to withdraw all troops from the country.

The Pentagon alleges that the move aims to “protect” the fields and facilities from possible attacks by the Daesh (ISIL or ISIS) terrorists, but Trump has said Washington sought economic interests in controlling the oilfields.

On July 30 and during his testimony to the Senate Foreign Relations Committee, US Secretary of State Mike Pompeo confirmed for the first time that an American oil company would begin work in the SDF-controlled Northeastern Syria.

A US-led military coalition has been bombarding what it claimed was positions of Daesh inside Syria since September 2014 without any authorization from the Damascus government or a UN mandate.

The strikes have on many occasions resulted in civilian casualties and failed to fulfill their declared aim of countering terrorism.

The White House has long been providing the SDF with arms and militant training, calling them a key partner in the purported fight against Daesh. Many observers, however, see the support in the context of Washington’s plans to carve out a foothold in Syria.

The presence of US forces in Eastern Syria has particularly irked civilians, and local residents have on several occasions stopped American military convoys entering the region.

In early August, Damascus condemned an oil agreement signed between the SDF and an American company. It said the contract was null and void with no legal effect.

Such support has also angered Washington's NATO ally, Turkey, which views militants from the Kurdish People's Protection Units (YPG) – the backbone of the SDF – as a terrorist organization tied to the homegrown Kurdistan Workers' Party (PKK).