TEHRAN (defapress) – Deputy Coordinator of IRGC Aerospace Force said that enemies will see the surprising and utmost defense power of the country appropriately if they threaten.
News ID: 82352 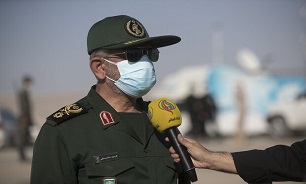 Speaking on the sidelines of 'Modafean Aseman Velayat' (The Defenders of Velayat Skies) Military Drill on Thu., Brigadier General Fereydoun Mohammadi Saghaei pointed to the role of IRGC Aerospace Force in the war game and added, “In this exercise, a new generation of equipment and systems of radar, missiles, electronic warfare, command and control of IRGC Air Force (including Ghadir, Bashir, Matla’ Al-Fajr radar systems as well as Khordad 3 and Tabas radar systems, manufactured by domestic experts in IRGC Aerospace Force) has been used in the form of an integrated air defense network with the guidance and operational control of the country's air defense base.”

Successful performance of IRGC Aerospace Force’s indigenous defense equipment and systems in detecting, intercepting and destroying assigned targets within the framework of network-based operations is one of the turning points of the military drill, he highlighted.

Islamic Republic of Iran will not never stop in developing and upgrading its defense system and equipment, he said, adding, “Given that the level and quality of threats in the airspace are constantly changing and there is a significant range of threats, the defense capabilities of the IRGC Air Force are changing and updating in proportion to these threats every day, so that today, we have provided surprising capabilities to deal with the enemy.”