TEHRAN (defapress) – Referring to the meeting with his Turkish counterpart, Iran’s Deputy Foreign Minister said that Iran and Turkey have undeniable role in peace and stability of the region.
News ID: 82423 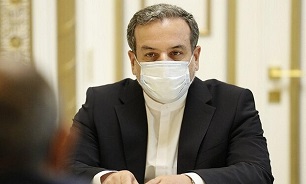 In a tweet on Saturday, Abbas Araghchi wrote, "Frank and productive discussion with Deputy Foreign Minister Sedat Önal in Ankara."

"Iran and Turkey are two major players with undeniable role in peace and stability of the region," he added.

Araghchi and his Turkish counterpart Sedat Onal met and held talks in Ankara late on Friday.

He has arrived in Ankara on Friday on his regional tour which earlier took him to the Azerbaijan Republic, Russia and Armenia.

During the meeting, the diplomats discussed a range of issues regarding the developments in the Nagorno-Karabakh conflict, as well as Iran’s initiative to improve the situation.

Araghchi started his regional tour on Tuesday, which first took him to Baku and then to Moscow, to present Iran's initiative for solving the Nagorno-Karabakh crisis peacefully.

Iran's Regional Initiative includes a ceasefire, discontinuation of attacks on residential areas and civilians, as well as the return of the displaced to their homes, according to Araghchi.