TEHRAN (Defapress) - Head of the Palestinian resistance movement Hamas Ismail Haniyeh penned a new letter to the Leader of the Islamic Revolution Ayatollah Ali Khamenei to brief him on the latest developments revolving around Palestine.
News ID: 83370 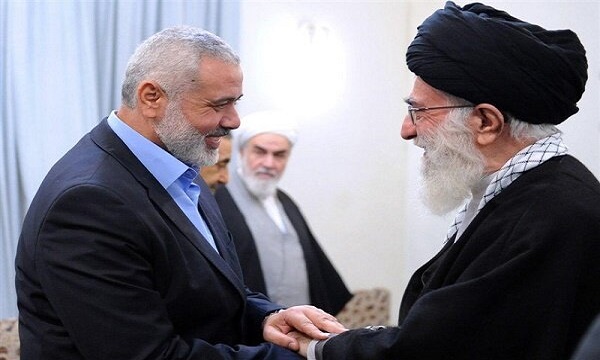 The Zionist regime of Israeli intensified its aggression on the besieged Gaza Strip from air and sea on Thursday as the new escalation of the conflict between Palestinian resistance forces enters its 11th day.

The intensified bombardments and naval attacks by the Israeli regime on besieged Gaza increased the number of martyred Palestinians to 230, including 65 children and 38 women on Thursday, according to the latest figures released by Palestine Health Ministry. More than 1,600 Gazans have also been injured.

It was also announced on Thursday that Qassam Brigades targeted a bus carrying Zionist soldiers in occupied land with a precision-guided missile in the north of the besieged strip. According to the latest reports, the Zionist army confirmed the attack on the bus in north Gaza, saying one soldier was injured.

Furthermore, demonstrations against deadly aggression on Gaza continued across the world on Thursday with pro-Palestine rallies reported in Washington, Berlin and Brussels.

The new round of clashes between the Palestinian Resistance and the Zionist regime began last Monday after an ultimatum given by the Gaza Resistance forces to Tel Aviv expired at 6 PM local time. The Palestinian resistance groups had requested the pullout of the Israeli forces from the al-Aqsa Mosque and Qud's Sheikh Jarrah neighborhood, where the Zionist settlers with the support of the Israeli security forces were trying to forcefully evict Palestinian families. The forceful eviction of Palestinians sparked Palestinian demonstrations for days before the Gaza conflict began.

In response, the Gaza Resistance forces have fired thousands of rockets towards the occupied lands, killing at least 12 Zionists and injuring hundreds of them.