TEHRAN (Defapress) - UN Middle East envoy Tor Wennesland has warned that the Zionist settlers march through Holy Quds could re-ignite another round of confrontation between Palestinian resistance groups and the Israeli regime.
News ID: 83458 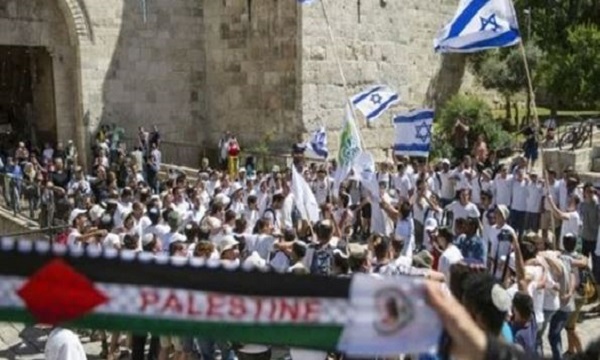 Israel regime has raised its level of alert ahead of right-wing Zionist settlers march known as "Flag March" through Holy Quds, as Palestinian groups vow response to 'any attempts to attack Al-Aqsa' and international mediators work to prevent escalation, the Zionist local media Harretz newspaper English website reported on Tuesday.

"Tensions [are] rising again in Jerusalem (Quds) at a very fragile and sensitive security and political time, when UN and Egypt are actively engaged in solidifying the cease-fire," UN Middle East envoy Tor Wennesland said on Twitter.

"[I] Urge all relevant parties to act responsibly and avoid any provocations that could lead to another round of confrontation," he said.

In the wake of Quds upcoming Flag March, a Gazan protester was injured by Zionist military fire and two fires broke in occupied Palestinian lands under the control of the Israeli regime after Gaza incendiary balloons land in the south.

According to Haaretz, dozens gathered on Tuesday near the Gaza border and clashed with the military forces stationed there. The Zionist military fired tear gas canisters and Ruger rifles and one of the protesters was injured by the fire.

Two fires broke in the occupied land after incendiary balloons from Gaza landed the south. Fire fighting teams are working to bring the fires under control.

The Flag March was originally scheduled for last month but it was diverted due to security concerns as clashes between Zionist security forces and Palestinians in the Quds city intensified.

While Egypt and other mediators are working to prevent an escalation, Hamas still considers all options, a spokesman for Hamas said Tuesday. Mohammed Hamada added Egyptian mediators were in contact with all Palestinian factions to prevent a flare-up.

The Islamic Jihad also reiterated the necessity to resist "provocations and any attempts to attack Al-Aqsa Mosque." The warnings come less than a month after Zionists were forced to accept a cease-fire.

Meanwhile, dozens of shop owners Quds closed their stores in the wake of the upcoming Flag March.