Vladimir Putin Supports Qatar, A US Partner Criticized by Trump

TEHRAN (defapress) - Russian President Vladimir Putin reached out to the leader of Qatar just days after the Middle Eastern country was accused by neighbors of supporting terrorism.
News ID: 65147 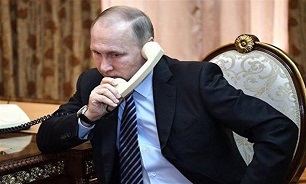 That's a pointed show of support for Qatar, which finds itself isolated from Saudi Arabia, the United Arab Emirates, and other Arab nations who believe the regime supports terrorism and is too friendly with Iran. It's also another example of Russia's cozying up to a critical US partner in the Middle East at a time of tension between traditional allies.

"Russian-Qatari cooperation, primarily in the trade, economic and investment areas, was discussed, and the results of the meeting of the bilateral Intergovernmental Commission in April 2017 were highly praised," the Kremlin said, Washington Examiner reported.

That announcement came hours after President Trump took credit for Saudi Arabia's decision to cut diplomatic ties with the Persian Gulf neighbor. "So good to see the Saudi Arabia visit with the King and 50 countries already paying off," Trump wrote in a series of tweets. They said they would take a hard line on funding, extremism, and all reference was pointing to Qatar. Perhaps this will be the beginning of the end to the horror of terrorism!"

Qatar is home to a critical US military base, including the headquarters of US Central Command in the region. "The United States and the Coalition are grateful to the Qataris for their longstanding support of our presence and their enduring commitment to regional security," said Maj. Adrian J.T. Rankine-Galloway, a Defense Department spokesman, said one day before Trump's tweets.

That said, while Qatar has few options for taking retaliatory steps, it prefers to have the US military in the country "because it gives them an external guarantee of security," Kristian Ulrichsen, Chatham House associate fellow in London, told The National, a media outlet based in the United Arab Emirates.

Trump's tweets might also put increasing pressure on Qatar to implement reforms or even the replacement of the current emir.

"Any de-escalation to the crisis is likely to require a leadership change in Qatar," Control Risks, a consulting firm, wrote in an assessment of the crisis. "Such a resolution would likely be triggered by, first, a consensus within the Al Thani family that mediation or smaller concessions would not appease Saudi Arabia and the UAE and, second, signals from the US that it would not pressure these countries to back down."