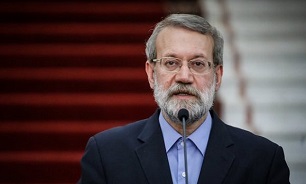 Larijani made the remarks in a meeting with his Kazakh counterpart Nurlan Nigmatulin, where he thanked him for the country’s fair and unbiased views on Iran’s nuclear deal.

Pointing to the nuclear deal and all the hard work to achieve it, Larijani said "Iran has paid some prices to reach the deal which was also beneficial to Iran; the agreement is not bilateral, but the US has breached it in the past few months.”

The Iranian official went on to say American officials’ attitude hinders economic agreements as well; if they continue this behavior, the agreement will be cancelled, leading to complications in the region.

He stressed that the US lack of commitment to multilateral and international agreements must be addressed in the United Nations, and other countries have to denounce such conduct which is disapproved by European countries and even the United Kingdom.

"If US unilateralism is not stopped, there will be serious consequences; they have withdrawn from Paris and UNESCO agreements as well which creates a state of disorder.” The Iranian parliament speaker stressed.

Parliament speaker referred to terrorism in the region and emphasized on Kazakhstan’s influential role in the matter noting that Astana made a lot of efforts to root out terrorism in Syria and restore peace.

Larijani put emphasis on parliamentary relations between Iran and Kazakhstan, and the need to expand bilateral ties, saying "the groundwork for economic cooperation between the two countries has been laid, and we need to concentrate on investment, business and economic fields.”

Nurlan Nigmatulin, for his part, said the trips of the two countries’ official are effective in developing relations.

He named Iran as one of the main business and economic partners of Kazakhstan and stated "we have always tried to increase the level of political and economic relations with Iran, currently the two nations enjoy solid relations which should be expanded.”

Kazakhstan parliament speaker voiced optimism that nuclear deal is treated with justice and Iran’s benefits are secured, adding that "we have always supported Iran’s plans and its role in international organizations; we will never forget Iran’s supports of our country.”