Us Department of health and medical administrator Rajabi

"We are now prepared to deal with all kinds of microbial and chemical weapons and biological threats," the army chief said, pointing out that the wars in the region are in terms of weapons and levels of destruction.
News ID: 66383 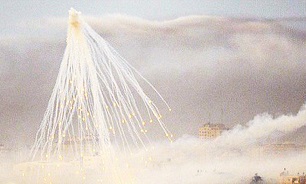 According to defapress reporterIslamic Republic of Iran army, in an interview with a reporter for defense forces, the Ministry of defence said: we are trying to strengthen the fight against drugs and in this regard to the conferences have been held.

He stated that we exchange platform between teachers and the staff of the armed forces of Iran's armed forces have prepared and added: the scientific meetings directly with the help of the readiness of the armed forces and related medical staff support of fighters in all conditions and promote their health.

Gen Rajabi said to assess the level of training that the personnel can see, over the years, the two exercises will be held in your home for the day and get ready or prepared for a crisis.

Army Colonel said: in the context of the establishment of the biological system in the armed forces, we can dare to do that we have a greater ability for the nation State, that is, in all areas of training, equipment and personnel, we have good abilities and on this basis we have equipped their centers and we're ready for that We apply the requirements.

He added: "in the form of exercises and maneuvers, the most difficult conditions to be set and we usually defend the biological and chemical materials.

General program with reference to the views of the war in the region, stated: we are all microbial and chemical weapons in the past wars or wars of the area that today is used around us, such as white phosphorus weapons being used. We have equipped ourselves with the weapons we have and the condition of the weapons critical to work so that we can close ourselves in terms of the forces of the amazing support.

With reference to the readiness of the armed forces in the field of drug control, he said: in the context of the war, we are a chain of one soldier to teach direct and soothing has started, we have begun and this step up to grade 2 and grade 1 emergency, that the surgeon is our cell phone, looking for The field hospital, and after that, the regional hospital of fix we are in chains.

In the end, the General said: we are always the first candidate for the forces placed in critical condition and we will do our job. He said the health care system we have all the necessary equipment to deal with the various situations of war and natural disaster.
Tags: General rajabi ، commander of army healht ، armed force ، chimical bobms ، biological defenes
0 Error Report
your comment