Martyr Ibrahim Amiri: Help your brothers in "Palestine" and "Lebanon" and "Afghanistan" 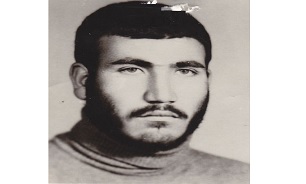 According to the Defapress of Kerman:

"The martyr Ibrahim Amiri» on the tenth of June the year 1963 in the village", "city of" hanza textures» was born. The era of the rubber seal in the "prep" and "texture" and his education until the end of his high school diploma and continued.

After graduation diploma and entered the revolutionary guards to safeguard jobs chosen. With the onset of the imposed war voluntarily and was eventually deployed to the front on 18 August of the year 1362 in the area "m" was martyred.

Today the battle front was that the right against falsehood, one of my money , because I am the best of blood where passengers cleared in your country in the way it is said of the blood has been shed, and best of the sons of Islam and the most sincere human blood in the present age of the Earth, where I mention That is from here to there in a whatever soil it ojab to the blood of a martyr.

I am looking for caravans this caravan I've fallen way that I helping the convoy and in this way he was leaving up in the warm embrace of "my pushes nedaye in the blood and be receptive sarkhi's testimony and details in the Sun to meet the leader of the martyrs of Khuzestan and grave subject I make this pilgrimage with friends "or say  Hussain (AS)! If the day of Ashura a. and a. your friends and give a shout out to you and the other did not, we've closed a pact with you that way you and continue your goal. "

Lord! help  me up from all the air and clear desire anymore, because it's the only fight I mention, but I mention fighting is also their hahai, o sunlight on my little heart to heart me from thy btab daghi ground pests away. Hussein's bloody hot if its atmosphere but some few exceptions anyone you did not helping  and all followers , you say labbaik nedaye/in the warm atmosphere of the Earth, and bloody hands to fist you will say, and compliance to nedaye/your love will go  to the Katbala of Iran.

Lord! You be the witness that because of you and ur satisfaction cutting of  this world  and chose your way and the path I have chosen the way Hussein (AS) and the way of my leader Imam khomeini Idol-breaker. Maboodm, hasbm, Islam, Quran, writing of Hezbollah and  my leader 's spirit.

The Lord will say that thanks to me at this juncture brings to the world and to the time I put the national party gave up on queuing capabilities. The Imam Khomeini  will send greetings and love him dearly, I will because it's so me will get to maboodm's leadership and that they like that I shot my holes and it permissible for mortar and quiver like that I ripped, my body Because of this my will and freedom  post to lqaallah and link to the last drop of its blood, and will help preserve the securing dear, because Islam is a religion of honor and virtue and the cult of self-esteem, O dear people! Our beloved Imam behind a time, forbid this don't empty the old Russia which the Imam gives up hope is pinned to your eyes and if you do survive and Islam without a backup you have shared and the Lord never gave you will not win the day, pride and cause of the Get your own without you mentioned and the remembrance of God and stay way ahead and unaware that it should not be.

The prestige and the leader of the revolution and the Revolution itself, The position is critical and the enemy is lurking in the scarred beware of coming out and proud divine experiment and the steadfast and firm until the end.

But you wind up giving that land of the Imam (PBUH) will defend. The soldiers of Islam, which is a drop of your blood boiling moment to moment in the path of Islam and the Quran will be poured, which invited suppliers meet Hussain (AS) and who is in the right and sometimes vicious combat, o friends  a darling your veil of the soul, the fist of the node's your voice, your look, your step, Your words, your worship and your courage, your testimony and bang your dlenoazh and your acute Thunder Soroush of world arrogance Palace base to a command in the Lord's day, and the heart of a Sunni rebel group  to help all the enemies of Islam and their militant brothers and to all the people of the helping mstadaf In the world of your Muslim brothers to hurry and helping in "Palestine" and "Lebanon" and "hurry up".

Our Lord! You've got power to the sword of Islam in the Warriors of Badr, front lips of the guards in the battle of tabouk and thirsty you patience and stamina, moms and dads and brothers and sisters with their loved ones to the srblandi qrbang Ah Islam and the Koran and have sent you the blood of the martyrs Oppressed and his true friends, the humble servant, by the testimony of syrup and turn weak and you will mergm the testimony which God want in the way you put yourself.