TEHRAN (defapress) – Delegations from Russia and Iran are holding consultations on Thursday during the eighth round of talks on the Syrian settlement in Astana.
News ID: 67637 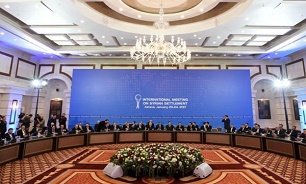 The eighth round of talks on Syria started on Thursday in the Kazakhstani capital. The agenda includes the adoption of a provision on the working group regarding the release of detainees and transferring the remains of any deceased. There are plans to approve a statement on humanitarian demining, including the World Heritage Sites in Syria.

A delegation of the armed Syrian opposition has also arrived in Kazakhstan’s capital of Astana to participate in the eighth round of the international talks on Syria, Kazakh Foreign Ministry Spokesman Anuar Zhainakov told reporters on Thursday.

"All the participant delegations have arrived in Astana. The Syrian opposition delegation comprises more than 20 members, they all have arrived," Zhainakov said.

The peace underwriters - Russia, Iran and Turkey - are also expected to study the initiative to convene the Syrian Congress on National Dialogue.

The plenary session in Astana will be held on December 22.