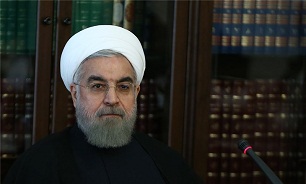 In a message to his Algerian counterpart Abdelaziz Bouteflika on Friday, President Rouhani sympathized with him and the bereaved families of those killed in the military plane crash in Algeria’s Blida Province.

Rouhani further wished health and success for the Algerian president and mercy for the victims of the tragic incident.

Bouteflika announced three days of national mourning after the plane slammed into a field near the Boufarik airbase 30 kilometers (19 miles) south of Algiers shortly after it took off on Wednesday.

The aircraft was mostly carrying army personnel and their family members on their way back to their barracks in the country's far south.

Flags flew at half-mast on public buildings and foreign embassies in the capital on Thursday as government departments observed a minute's silen.