Iran Offers to Host Regional Center for War on Piracy 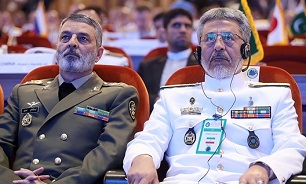 TEHRAN (Defapress)- "We hope to take effective steps with the support and partnership of you, the navy commanders, in the next two years to materialize the goals that we have defined," Rear Admiral Sayyari said, addressing the closing ceremony of the IONS conference in Tehran on Tuesday.

He added that the decisions include establishment of a regional center in Iran's Chabahar port to train and combat piracy, formation of a combat as well as a relief and rescue group, start of air and naval patrols, sharing of technical capabilities and equipment and establishment of contact lines among the naval commanders of the Indian Ocean littoral states.

In relevant remarks on Tuesday, Iranian Navy Commander Rear Admiral Hossein Khanzadi announced that the foreign countries which participated in the Indian Ocean Naval Symposium had voiced their readiness to form a military coalition within the IONS framework.

"We proposed to establish a military alliance among countries attending the IONS conference in Tehran; most of those commanders with whom I had meeting agreed to this proposal," Rear Admiral Khanzadi said.

He hailed the IONS conference in Tehran, and said it was the biggest military conference of its kind held in Iran since the Islamic Revolution.

Admiral Khanzadi said that through this event, some of the naval commanders of the countries that had never been in "our country came to Iran and that was one of the major political achievements of that event for Iran, irritating enemies such as the Zionist regime".

“The enemies know that such conferences could reduce the pressures on Iran,” he said, adding, "The presence of representatives from five continents and 32 independent countries in Iran could neutralize the enemies’ attempts to isolate Iran."

Khanzadi added that due to the importance of the IONS, the United States has applied to become an observing member while it has been denied so far.

Hosted by Navy of Islamic Republic of Iran Army, the 6th Indian Ocean Naval Symposium (IONS) kicked off in Tehran on Monday morning.

The two-day event brought together 35 high-ranking military delegations from across the world, including India, Turkey and Australia.