Iranian President Hassan Rouhani’s visit to Europe is his first trip to the continent following the recent international developments and US withdrawal from the Joint Comprehensive Plan of Action (JCPOA), signed between Iran and P5+1 in July 2015.
News ID: 71064 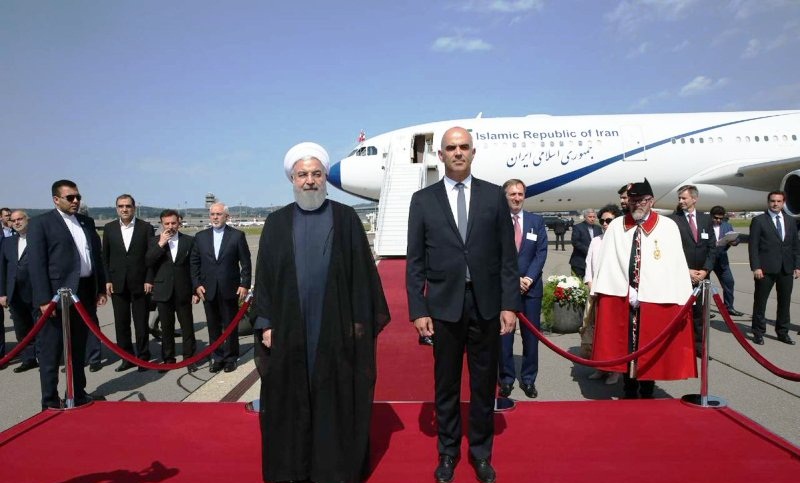 TEHRAN (Defapress)-Rouhani left Tehran for Switzerland, to be followed by Austria on Monday, at the invitation of his Swiss and Austrian counterparts. That is why it has come under the spotlight of international and the national media. Such important visits at the present critical time occur as the White House claims that US unilateral sanctions will lead to Iran’s complete isolation and American delegations are doing their utmost to tighten the noose of sanctions around the Islamic Republic.

However, the truth is that Rouhani has been invited by the most senior officials of two European states to visit the two countries, which indicates that European nations are pragmatically turning Trump down.

The important aspect of Rouhani’s trip to Europe pertains to the preservation of the JCPOA which has at present become the main issue of European states. Immediately after the US withdrawal from the Iran nuclear deal, by deciding to save the deal, Europeans demonstrated their determination to remain committed to the JCPOA. They are currently exploring ways and means to implement their decision.

This comes as Iranian officials have fully elucidated for the European Union (EU) that now is not the time for words; that the JCPOA can only be preserved through adopting pragmatic solutions. Naturally, Iran seeks to create a win-win situation in which all parties involved can benefit from the deal. In addition to the benefits it has for Iran, the preservation of the JCPOA is highly in the interest of, and of the utmost importance to, European states as it safeguards their political, economic and security interests.

Due to the long distance between the US and the Middle East, Washington is not much concerned about and impact of the insecurities they have created in this region by their unwarranted interference.

However, Europeans are directly affected by these insecurities. Thus, as an important regional power, Iran can closely cooperate with the European Union in the field of improving security. Europeans have already benefited from the weakening of the Daesh in the region.

Therefore, in addition to saving the deal and guaranteeing its maximized economic benefits for both sides, Iran and the EU are both required to pay special attention to fostering their joint collaborations regarding security issues.

In such a situation, extending an invitation to a top Iranian official and holding deeper consultations between Iran and Europe are indicative of both sides’ seriousness, determination and shared efforts to work towards innovative solutions to save the international agreement.

Efforts to save the JCPOA come as, apparently, the gap between Europe and the US is gradually widening.

The Iran nuclear deal is only a stage on which this growing gap is manifesting itself. It is quite natural for Europe to decide to defend international norms at a time when the US has waged a trade war against the EU by setting high tariffs on its imports, is violating international laws, and doing its best to destroy international bodies, which have been positive human achievements following World War II.

Europe feels that it must ensure its own security independently. That is why the EU has announced plans to form a united European army. The author of the present article believes that the present international situation makes Europeans more determined to preserve the JCPOA and support the deal more strongly to resolve their own problems.

Although the benefits of the JCPOA are economic in nature for Iran, they also provide security for Europe. Europe sees its prestige and respectability in saving the deal. Switzerland and Austria have had favorable political and economic relations with Iran.

The cooperation between Iran and these two states has been in the fields of developing infrastructure, pharmaceutical and railroad industries, as well as joint investments.

Thus, by resolving banking and insurance problems which hinder the expansion of trade with Iran, these two countries are expected to help expand relations with Tehran.