TEHRAN (defapress) – Song Tao, the Head of the International Liaison Department of the Communist Party of China, said that Iran and China can develop cooperation to jointly counter challenges.
News ID: 72400 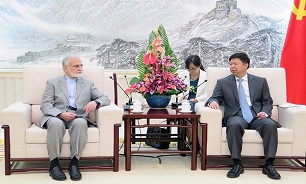 Referring to the role of Iran and China in the new age, Tehran and Beijing can counter the existing challenges and risks with bilateral cooperation, said Song Tao, the Head of the International Liaison Department of the Communist Party of China.

The Chinese politician made the remarks on Saturday while meeting with the Head of Iran's Foreign Policy Strategic Council Kamal Kharrazi who is visiting Beijing.

“The world is experiencing unprecedented changes and Iran and China are both influential players in their own regions. Therefore they have to cooperate for solving their problems,” he made the remarks referring to the commonalities of Iran and China in history and civilization.

“We need to have an Eastern plan in this regard to not let countries with short historic experience impose their political system on others and claim the ruling over the world,” he asserted.

The Iranian former foreign minister, in this meeting, for his part, said that the ground for further developing regional cooperation between Iran and China is ready.

Referring to the plan to develop Chabahar port in southeastern Iran and its link to Pakistani port of Gwadar and then to the west of Iran, Kharrazi voiced hope that the ground for developing cooperation extend to reconstruction of Iraq and Syria and further to the Mediterranean region.

In the meeting, the two sides discussed the peace pipeline to transfer energy to Iranian eastern neighbors and the transfer of energy to the west of Iran till the Mediterranean region through Iraq and Syria.

The two sides also exchanged views on the ways to develop cooperation in areas of oil sale and preservation of the JCPOA (Iran nuclear deal of July 14, 2015). They highlighted that keeping the deal alive is necessary and the 4+1 member states should cooperate for this cause.