TEHRAN (defapress) – Iranian President Hassan Rouhani expressed condolences to Indonesia over a passenger plane crash in the Java Sea that killed all people on board.
News ID: 73376 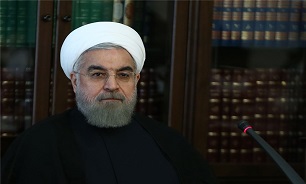 In a letter of condolence to his Indonesian counterpart Joko Widodo on Monday, President Rouhani expressed his sympathy with the Southeast Asian government and nation over the Boeing 737 crash that killed all passengers on board, including a number of government officials.

The text of the Iranian president’s letter is as follows, according to his official website:

“In the name of Allah, the most beneficent, the most merciful

The tragic plane crash, which left a number of Indonesian citizens and state officials dead, caused great grief and sorrow.

President of the Islamic Republic of Iran”

The doomed airliner, with 189 people on board, went down into the Java Sea shortly after takeoff on Monday.

Indonesia's search-and-rescue agency said the Lion Air passenger flight from Jakarta to the island of Sumatra has crashed into the sea and it was unclear if there were any survivors.

Wreckage has been found near where the aircraft lost contact.

The crash is the worst airline disaster in Indonesia in years.

Indonesia relies heavily on air transport to connect its thousands of islands, but has a poor aviation safety record and has suffered several fatal crashes in recent years.