TEHRAN (defapress)- Iranian Ambassador to Beijing Mohammad Keshavarzzadeh, in a meeting with Secretary General of the Shanghai Cooperation Organization (SCO) Vladimir Norov, reassured that Tehran is deterimmned to devlop ties with China and all member states of the SCO.
News ID: 75181 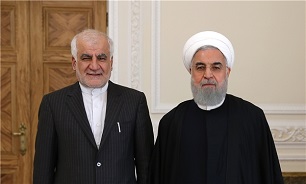 Keshavarzzadeh reassured Norov, during the Thursday meeting in Chinese capital city of Beijing, that Tehran is determined to expand relations with China and other member states to the SCO.

“While the Trump administration, as an irresponsible power, always seeks to build walls and undermine other nations’ bilateral relations instead of paving the way for interaction and convergence in the world, Iranian and Chinese leaders and nations are determined to break down all obstacles and develop their historic relations in all fields,” said the Iranian ambassador during the meeting.

He also voiced Iran’s expectation for a positive development regarding the acceptance of Iran’s formal membership to the Shanghai Organization during Norov’s term as the SCO’s chief, calling for drawing up and putting into effect a roadmap for improving Iran’s membership in the SCO in the near future.

Throughout history, Iran has had good relations with most of the SCO member states, said the secretary general, highlighting the importance of the role and position of Iran in its interactions and cooperation with the Shanghai Organization.

Earlier on December 22, Keshavarzzadeh said that improvement of trade ties with China is of great importance and development of economic relations with this country is a top priority.

He made the remarks in a meeting with the Iranian traders and entrepreneurs residing in China.

The diplomat also underlined facilitation of commerce between Tehran and Beijing and removal of obstacles on the way of the two countries' banking cooperation.

In a related front, earlier on October 1, Iranian President Hassan Rouhani forwarded a message to his Chinese counterpart Xi Jinping, felicitating him and his nation on the 69th anniversary of the founding of the People's Republic of China.

The Iranian head of government extended greetings on the advent of the felicitous occasion asserting that Tehran-Beijing ties are at a good level because of the willpower of the senior officials of the two countries.

Rouhani expressed hope that with regard to the long-standing history of relations between the two countries, further ties will develop in the new era.

Iran and China are enjoying strong bilateral relations, and earlier in September, the two countries launched a 9,000-kilometer-long railway within the framework of new Silk Road Program between the two countries.

The new Iran-China railway used by cargo and service trains connects China's Inner Mongolia to the city of Bam in Southeastern Iran.

During the opening ceremony of the new railway, a cargo train moved from Inner Mongolia logistic and industrial town to the city of Bam. It is estimated to arrive in Bam in 15 days.

The train consists of 41 containers carrying equipment, machineries and car spare parts. The consignment is worth $1.5 million.

In another development, a cargo train left the city of Bayannur in Western Inner Mongolia for the Iranian capital city of Tehran.

The two railways are part of a larger rail network which is to connect China to the Europe via Iran.