TEHRAN (defapress) - A Nice bound Norwegian passenger plane carrying 169 passengers was forced to turn around mid-flight due to a bomb threat and make an emergency landing in Stockholm.
News ID: 75467 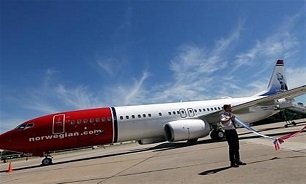 The Boeing 737 landed back at the Arlanda airport in Sweden's capital Stockholm and was met by rescue crews. All passengers and crew have been evacuated and Special Forces have arrived to search for the bomb.

“We can confirm that we are working on the matter and that there is information from an airline that they have received a bomb threat. We are on site at Arlanda,” Towe Hagg of the Stockholm police said, RT reported.

One passenger reported to local media that those onboard have been told to turn off their phones while the rescue operations are in progress. The police instructed the passengers to exit the plane in groups of 10.

The threat was reported to the Swedish Maritime Administration's naval and aircraft rescue center via the air traffic control in the city of Malmo. There is still no information on how the initial threat was conveyed.

Norwegian airlines released a statement regarding the incident on their website: “We can confirm that a bomb threat was directed at a flight from Arlanda to Nice.  For safety reasons, the aircraft returned to Arlanda. We note that there are a lot of questions from the media. This is now a police case, so further questions must be addressed to them. Norway's main priority right now is the safety of our passengers and employees."