TEHRAN (defapress)- US President Donald Trump stated on Saturday that North Korea does not have any economic future with nuclear weapons, after Washington-Pyongyang talks fell apart abruptly on Thursday.
News ID: 75951 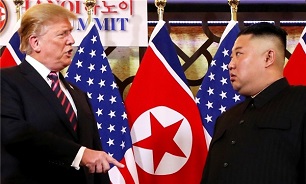 “North Korea has an incredible, brilliant economic future if they make a deal, but they don’t have any economic future if they have nuclear weapons,” Trump said at a Conservative Political Action Conference in Oxon Hill, Maryland, on Saturday in his first major public appearance since returning from his second summit with leader Kim Jong-un in Hanoi, Vietnam, World News reported

He added that the relationship with North Korea seemed to be “very, very strong”.

"And a lot of what I do with respect to North Korea, and any success that we hopefully have – and we’ve had a lot, given no credit. They don’t remember that in the last days of the [Barack] Obama administration, rockets were flying all over the place," he stressed.

Special Representative for Korean Peninsula Peace and Security Affairs Lee Do-hoon is planning to visit the United States in the coming week to meet American officials to discuss the second US-North Korea summit as well as the future agenda, according to a South Korean official.

Trump and Kim commenced their two-day summit over the so-called denuclearization of the Korean Peninsula on Wednesday. On the second day of formal talks, both leaders expressed cautious optimism on reaching an agreement, and urged patience.

However, following the summit, Trump told reporters that "he had to walk away" from the talks because of the North's demands to lift all economic sanctions against Pyongyang as a prerequisite to denuclearization.

North Korea demanded the partial lifting of sanctions that “that hamper the civilian economy and the livelihood of our people”, specifically parts of five UN resolutions from 2016 and 2017.

In exchange for partial lifting of sanctions by the US, North Korea would permanently remove plutonium and uranium processing facilities and Yongbyon, in the presence of US experts, Ri said, adding that the "US was not ready to accept our proposal".

The North Korean official stated that Washington demanded “one more” measure beyond dismantling Yongbyon, which went too far for Pyongyang.