TEHRAN (defapress) – A former official at the United Nations and professor of international law highlighted reasons behind Saudi Arabia’s recent overt and covert measures to develop its ties with Israel and said both Riyadh and Tel Aviv are, in fact, serving Washington’s interests in the region.
News ID: 75969 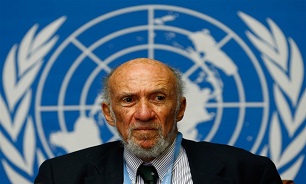 “…Since Trump became president in the United States, for the Saudis and Israelis to join forces was also a way of serving US strategic interests in the region, which sought to end the Arab/Israel conflict and to build a coalition together with Riyadh and Tel Aviv that was aggressively hostile to Iran, dedicated to curbing its regional influence and destabilizing its internal governance structure,” Richard A. Falk said in an interview with the News Agency.

Professor Richard Anderson Falk is the author or co-author of 20 books and the editor or co-editor of another 20 volumes. In 2008, the United Nations Human Rights Council (UNHRC) appointed him to a six-year term as a United Nations Special Rapporteur on "the situation of human rights in the Palestinian territories occupied since 1967”.

The following is the full text of the Interview:

As you know, the Israeli and Saudi regimes do not have any official diplomatic relations but media reports have surfaced indicating extensive behind-the-scenes diplomatic and intelligence cooperation between the two. In your opinion, what goals is Riyadh pursuing by getting closer to Tel Aviv?

Falk: It has been clear to close observers for several years that the Saudi leadership perceived its vital national interests as served by developing positive relations with Israel. At the same time, it was politically risky for the Saudis to make this turn toward Israel too overt as the Palestinian struggle continued to have strong and intense support among the population, including in Saudi Arabia and throughout the Persian Gulf. Israel was, of course, receptive to such Saudi initiatives. This receptivity reflected the strong shared interest of the two regimes in confronting Iran, and especially since Trump became president in the United States, for the Saudis and Israelis to join forces was also a way of serving US strategic interests in the region, which sought to end the Arab/Israel conflict and to build a coalition together with Riyadh and Tel Aviv that was aggressively hostile to Iran, dedicated to curbing its regional influence and destabilizing its internal governance structure.

Furthermore, Riyadh is preoccupied, above all, with its own regime stability, and interprets every issue from this perspective. By moving closer to Israel, it also protects itself against standard Israeli policy of trying to weaken important states in the region by supporting radical opposition movements through a variety of covert mechanisms of intervention.

Recently, some media reports revealed secret links between top Saudi officials, including Minister of State for Foreign Affairs Adel al-Jubeir, and the Israeli spy agency, Mossad. Can we say that Israel has managed to infiltrate into Saudi Arabia and is dictating its policies to Riyadh? How do you see the future of relations between the two?

Falk: It is very difficult for an outsider like myself to have any real knowledge about such maneuvers involving transnational links among intelligence agencies. We do know that Israel is fully capable of both entering into positive inter-governmental relations with Saudi Arabia and at the same time hedging its bets by infiltrating its main governmental ministries. There are some indications that the anti-Palestinian assertions of Mohammed bin Salman were encouraged by both Israeli and American intelligence, and were reinforced by a variety of incentives, including pledges made to Riyadh to assist in the development of a Saudi nuclear program, which would include at least a threshold capability to produce nuclear weapons in a matter of months.

Generally speaking, how do you think about Saudi policies in the Middle East, including normalization of ties with Israel, and do you believe that regional countries would follow suit? If they would do so, how much are they ready to pay?

Falk: I definitely believe there is a trend in the Arab world, especially among the (Persian) Gulf countries, to seek normalization of relations with Israel, and as suggested above joint action on behalf of common interests. These initiatives also reflect the view that Israel has prevailed in its struggle with the Palestinian national movement, an approach encouraged by a variety of US anti-Palestinian moves, particularly the move of the American Embassy in Israel to Jerusalem in defiance of the international consensus. On this basis, Arab willingness to normalize relations with Israel can be interpreted as a realist adjustment to the outcome of the long conflict. I believe such an interpretation overlooks the persistence of Palestinian resistance, as recently expressed by the sustained Great March of Return, by the spreading BDS Campaign, and by the growing global solidarity movement that affirms the legitimacy of the Palestinian struggle for basic rights, especially the right of self-determination. The conditions throughout the Arab World are also vulnerable to a new series of uprisings, a Second Arab Spring, this time with a revolutionary vision of how to construct a more democratic governance structure and defend the process against internal enemies and external interveners.