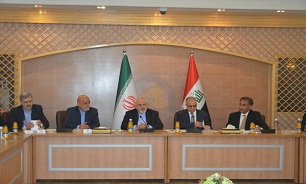 Pointing to the deep cultural, political and economic ties between the two neighboring countries, the official said Rouhani’s trip will be the beginning of a new chapter in Tehran-Baghdad relations.

The official made the remarks in a joint press conference on Sunday, which was also attended with his Iranian counterpart Mohammad Javad Zarif and Iran’s Ambassador to Iraq Iraj Masjedi.

He expressed hope that President Rouhani’s meetings with Iraqi President Barham Salih and Prime Minister Adil Abdul-Mahdi will bear the maximum results and help promote cooperation between the two countries in all areas.

Heading a high-ranking politico-economic delegation, Rouhani is set to embark on a three-day visit to Baghdad tomorrow (March 11).

According to Zarif, Rouhani is scheduled to discuss political and economic cooperation in various fields including transit, energy, and industry with the Iraqi officials.

Besides meeting with senior political figures, the Iranian president is set to visit the holy city of Najaf and meet with the great Shia Marja' Ayatollah Ali Sistani.