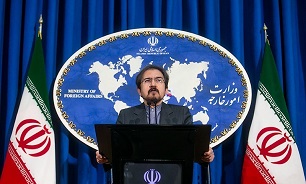 In a statement released on Friday, Qassemi offered his condolences to the Pakistani people and government over the tragic incident that led to the killing of at least 16 people and injuring of 30 others.

“The security and stability of neighbors is very important to the Islamic Republic of Iran and we hope that the Pakistani government and nation would thwart conspiracies of enemies of the region by preserving their unity and vigilance,” he said.

At least 16 people were killed when a powerful bomb ripped through a vegetable market in Quetta early Friday, officials said.

At least nine of the dead were Hazaras, a Shiite Muslim minority group that has repeatedly been the target of extremists.

There was no immediate claim of responsibility for the attack, which also injured at least 30 people, some of them critically. But Lashkar-e-Jhangvi, a banned militant group, has often carried out attacks against Hazaras in Quetta, the capital of Baluchistan Province, according to media reports.

For years, the Hazaras have lived in a state of perpetual fear in Quetta, and promises made by successive governments have failed to ensure their safety.