TEHRAN (defapress)- The Supreme National Security Council (SNSC) of Iran dismissed the recent remarks of the US Security Advisor John Bolton that Washington has sent an aircraft carrier and a bomber task force to the region to warn Tehran, describing the claim as a “gauche” attempt at psychological warfare.
News ID: 77272 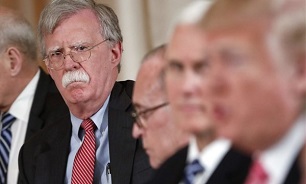 SNSC Spokesman Keivan Khosravi spurned the remarks made by Bolton who “announced” the deployment of the USS Abraham Lincoln Carrier Strike Group and a bomber task force to the US Central Command region.

Bolton, who has spearheaded an increasingly hawkish US policy on Iran, said on Sunday that the deployment was a means of conveying a “clear message” to Tehran.

“Bolton lacks understanding of military and security issues. His remarks are more intended to serve as braggadocio,” Khosravi added.

He cited the precedent of the US military’s sustained defeats in the face of regional crises, saying, “It is unlikely that the US military’s commanders and main components would be inclined towards testing the Iranian Armed Forces’ proven capabilities.”

Bolton had said that the deployment was an alleged response "to a number of troubling and escalatory indications and warnings."

Responding to Washington's move, Iran immediately declared the US as "state sponsor of terrorism" and American forces in the region "terrorist groups".

Iran's top security body, the SNSC, in a statement issued on April 08 evening declared the United States a “terrorist government”, and blacklisted the "CENTCOM and all its affiliates a terrorist group”.

The SNSC - that is headed by President Hassan Rouhani - condemned Washington's move, calling it “an illegal and dangerous action” that poses a “major threat to regional and international peace and security and grossly violates the rules of international law".

The statement further condemned the US decision as “unlawful and unreasonable action” prompted by the Islamic Republic's regional influence and success in fighting against terrorists, and blamed CENTCOM for harming Iran’s national security as well as ruining the lives of “innocent Iranian and non-Iranian individuals” to promote the US “aggressive policies” in West Asia (the Middle-East).

"The Islamic Republic of Iran regards this baseless move as a major threat to regional and international peace and security and a blatant violation of the compelling rules of international law and the United Nations Charter," Iran's top security body reiterated.