Sanctions on Zarif Indicate US Failure in Plots against Iran 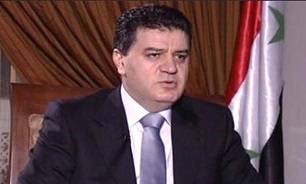 Mahmoud said on Wednesday that the US sanctions on Iran’s foreign minister is a clear sign of strength, authority and influence of Iranian diplomacy against the US policies in the region.

The paradigm presented by the Iranian Leader, government, and people to counter the US aggressive policies is turning challenges into opportunities to consolidate national capabilities in all fields, he added.

Mahmoud underlined that all the developments in the region show the failure of US plans against Iran and the Resistance, adding that Syria, Iran and their allies adhere to their stable principles of defending the rights of their people and opposing US policies of domination, bullying, blockade, and unilateral sanctions.

In separate statements on July 31, the US departments of State and Treasury announced the imposition of sanctions against Zarif because he “acted or purported to act for or on behalf of, directly or indirectly, the Supreme Leader of the Islamic Republic of Iran”.

The European Union has regretted the US decision, stating that it intends to keep working with the Iranian foreign minister.

“We regret this decision, and from our side, we will continue to work with Mr. Zarif as Iran's most senior diplomat, and in view of the importance of maintaining diplomatic channels", Carlos Martin Ruiz de Gordejuela, the spokesman of the European Commission for the international cooperation and development, said.

Moreover, Deputy Permanent Representative of Russia to the United Nations, Dmitry Polyanskiy, slammed the US move to impose sanctions on Zarif, arguing that the measure will block the way for any dialogue.

Polyanskiy described sanctions as against diplomacy, stressing that Moscow is against any type of bans, as they do not help find a solution.