US Pullout Not to Affect Afghanistan

TEHRAN (defapress)- Afghan President Ashraf Ghani said a partial withdrawal of US troops from the country will not have a crucial impact on the lives of the Afghan people.
News ID: 78461 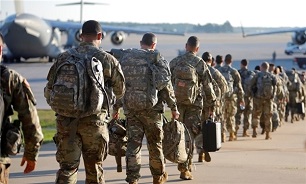 Ghani told Afghanistan’s TOLOnews that the withdrawal of some 5,000 troops from the country “will not bring basic changes in our lives”.

He added that the remaining number of forces “will support our Air Force, our Commando Force, and other Defense and Security Forces and will help the Resolute Support to continue [its mission in Afghanistan]”.

Currently, there are about 20,000 foreign troops, mostly American, in Afghanistan as part of a US-led mission to purportedly train, assist and advise Afghan forces.

Ghani further stated that he had called on US President Donald Trump in a letter seven months ago to reduce the number of US troops in Afghanistan.

It was reported that some 5,000 US troops will be withdrawn in 135 days from five bases in Afghanistan.

The Afghan president noted that the bases are small and that they will be handed to the Afghan forces.

Ghani made the remarks as representatives from the US and the Taliban militant group resumed a new round of talks in Qatar’s capital city, Doha, on Thursday.

A senior US official said that American negotiator “Zalmay Khalilza will inform the top Afghan leaders about the peace deal and then finalize a declaration to end the war in Afghanistan”.

Ghani, however, stated previously that peace was only possible with an agreement between the Afghan government and the Taliban.

The Taliban, which now control or have influence in about half of Afghanistan’s territory, have held several rounds of direct talks with US officials in the Qatari capital since October. The militants say they do not recognize the government in Kabul.

The negotiations take place almost 18 years after the US military invaded Afghanistan to overthrow a ruling Taliban regime.

The exit of foreign troops from Afghanistan is a condition set by the Taliban to extend the talks.

The Taliban’s five-year rule over at least three quarters of Afghanistan came to an end following the US invasion of the country in 2001.

American forces have since remained bogged down in Afghanistan through the presidencies of George W. Bush, Barack Obama, and now, Trump.