TEHRAN (defapress)- The Syrian Army is attempting to take full control of the key town of Ma’aret al-Numan in Idlib after it liberated the strategic city of Khan Sheikhoun earlier this week.
News ID: 78489 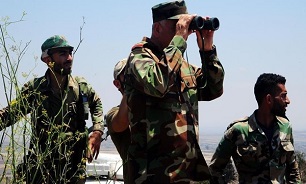 “According to intel, the Syrian Army will move towards the strategic town of Ma’aret al-Numan along the Damascus-Aleppo highway, 25 kilometers North of Khan Sheikhoun,” the Arabic-language Russian Sputnik News Agency quoted battlefield sources as saying on Sunday.

It pointed to the terrorist groups' fast retreat from Khan Sheikhoun towards Ma’aret al-Numan, and said that the Syrian Army has targeted the terrorists’ positions in the region.

Meantime, Syrian military expert Mohammad Abbas also pointed to the Syrian Army’s control over Khan Sheikhoun, and said army units plan to enter Saraqib and even Jabal al-Zawiyeh in Western Idlib in a bid to pave the way for their advances towards areas North or Ma’aret al-Numan.

On Monday, the Syrian army managed to enter Khan Sheikhoun after five years.

Also reports said on Wednesday that the local population in Ma’aret al-Numan in Southern Idlib were preparing themselves for the imminent entry of the Syrian Army troops into the city, adding that the people were eagerly waiting for the army’s military takeover.

He noted that the residents of Idlib and its countryside are expecting the Syrian Army to arrive in areas occupied by the terrorists, and said that large groups of residents of Ma’aret al-Numan and the city of Saraqib in Southern Idlib have visited the joint Syrian-Russian Command Headquarters for the implementation of peace plan.

Qorbi noted the massive presence of the terrorist groups in Ma’aret al-Numan and the Turkish Army’s occupying role in the region, and said that the Syrian Army is prepared to enter Ma’aret al-Numan.

He also pointed to the heavy defeat of the terrorist groups in Khan Sheikhoun city despite massive military backup by the Turkish Army and their retreat from the region, and said that negotiations are currently underway for exit of the Turkish Army troops from areas under its control in Hama.