TEHRAN (defapress) - At least 29 people were killed in two separate incidents in Burkina Faso's troubled north on Sunday after a food convoy and a transport truck were attacked, the government said.
News ID: 78648 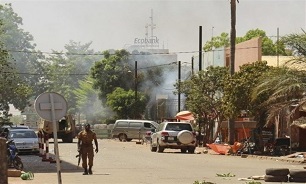 One vehicle transporting people and goods "rode over an improvised explosive device (IED) in the Barsalogho area" leaving at least 15 passengers dead, government spokesman Remis Fulgance Dandjinou said in a statement. Most of the dead were traders.

Meanwhile, about 50km away, 14 people were killed after a convoy of mostly three-wheelers taking food to people displaced by fighting, was attacked, Al Jazeera reported.

"This drama comes as important security efforts are under way in this region," officials said. "Military reinforcements have been deployed."

The West African country's army has been increasingly targeted by rebels. Earlier this month, an attack on a military base in northern Burkina Faso killed 24 soldiers.

The rebellion, which originated in neighboring Mali, began in the north but has since spread to the east.

The capital Ouagadougou has been attacked three times, including a March 2018 assault on the military headquarters that left eight dead.