Zarif Decries Escalation of US Economic Terrorism on Iran

TEHRAN (defapress) – Iranian Foreign Minister Mohammad Javad Zarif denounced the US for mounting the pressure of sanctions on Tehran after the ouster of hawkish US National Security Adviser John Bolton.
News ID: 78670 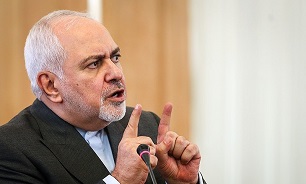 In a post on his Twitter account on Wednesday, Zarif took a swipe at his American counterpart Mike Pompeo and at US Secretary of the Treasury Steven Mnuchin for planning an intensification of sanctions against Iran while the world has gotten rid of John Bolton.

“As the world -minus 3 or 2 panicked cohorts- was breathing a sigh of relief over ouster of B-Team's henchman in the White House, Pompeo & Mnuchin declared further escalation of Economic Terrorism against Iran,” the top Iranian diplomat said.

“Thirst for war -maximum pressure- should go with the warmonger-in-chief,” Zarif added.

He also attached a photo of an executive order from US President Donald Trump on ‘Modernizing Sanctions to Combat Terrorism’, issued on September 10.

Trump fired Bolton on Tuesday, saying he had disagreed “strongly” with the hawkish advisor on policy.

Bolton is a veteran and controversial figure closely linked to the invasion of Iraq and other aggressive US foreign policy decisions. He had been seen as one of the main driving forces in the White House's muscular approach to Iran, North Korea, Venezuela and elsewhere.