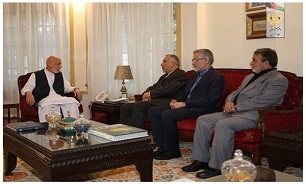 He made the remarks on Sat. in his meeting with the special envoy of the Islamic Republic of Iran to Afghanistan Mohammad Ebrahim Taherian, where he emphasized the key role of Iran in the peace process in Afghanistan.

In this meeting, Karzai reviewed issues related to the peace process in Afghanistan, as well as bilateral ties between Iran and Afghanistan and also regional developments.

He pointed to the friendly and historical bonds between the two neighboring countries and placed special emphasis on the key and vital role of the Islamic Republic of Iran in restoration of peace and stability in Afghanistan.

In a statement on Friday, Iranian Foreign Ministry Spokesman Seyyed Abbas Mousavi voiced concern over the escalation of military conflicts and attacks on public services and civilian gatherings in Afghanistan, and condemned any operation that would endanger the lives of civilians, particularly women and children.

He then expressed hope that all forces with an interest in the future of Afghanistan would overcome the current difficult situation through peaceful means and without any foreign interference.