TEHRAN (defapress) – Iran has devised the fourth step in reducing commitments to the 2015 nuclear deal, the Foreign Ministry spokesman said, warning the remaining parties to the JCPOA that Tehran will definitely take the step if they fail to fulfill their undertakings.
News ID: 79054 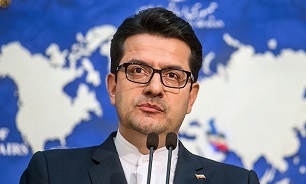 Speaking to reporters at a Monday press conference in Tehran, Abbas Mousavi said the fourth step to scale back Iran’s commitments to the JCPOA has been planned out.

Apart from the measures that the Atomic Energy Organization of Iran has announced as part of the fourth step, a series of other moves are in the decision-making stage, he added.

Mousavi expressed hope that Iran would not have to take the fourth step and that the remaining parties to the JCPOA would take positive measures.

On a joint plan proposed by France and Japan for the full implementation of the JCPOA, he said carrying out that joint plan is not tied to Iran’s fourth step.

The Europeans had announced, or pretended, that they could make up for the US withdrawal from the JCPOA, but their attempts have gone nowhere so far, he deplored, adding, “We hope that they would return to their commitments in the time remaining, otherwise, Iran has already designed its steps to create the balance (of JCPOA implementation).”