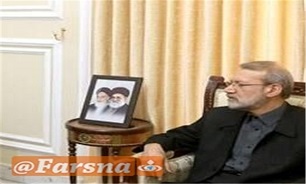 “We have facilitated the investment procedures for South African investors in a bid to provide a jump in economic cooperation between the two countries,” Larijani said in a meeting with South African Ambassador to Iran Vika Mazwi Khumalo in the Iranian capital on Monday.

He underlined that South Africa is an effective country in Africa, and said, “It should be a pioneer in developing trade relations with Iran.”

Khumalo, for his part, underscored the importance of reinforcing relations between the two countries, and said that the recent joint economic commission meeting has resulted in signing new bilateral agreements.

The South African envoy described relations between Iran and South Africa as strong and fruitful, saying developing banking cooperation is the prerequisite for promoting economic relations.

Holding various exhibitions in Iran and South Africa is significant for finding capacities of both countries concerning developing cooperation, the diplomat said.

Early in March, Iranian Deputy Foreign Minister for Political Affairs Seyed Abbas Aaraqchi visited South Africa where he met with a number of officials of the African country including Speaker of the National Assembly of South Africa Baleka Mbete.

Cooperation in the political and economic arenas was among other issues discussed during the Thursday meeting.

Mbete, for her part, underlined significance of bilateral relations and highlighted South Africa’s readiness for promoting economic cooperation with Iran.

Earlier on February 19, South African Ambassador to Tehran Vika Mazwi Khumalo said that the US unilateral withdrawal from the JCPOA will not decrease his country’s economic, commercial and cultural cooperation with Iran.

Khumalou, in a meeting with Chairman of the Iranian Parliament's National Security and Foreign Policy Commission Heshmatollah Falahatpisheh, said that his country was determined to strengthen bilateral relations with Iran.

Khumalou insisted that his country was aware of Iran's fulfillment of the JCPOA commitments and continued to maintain its support and the implementation of the deal.

“South Africa has always had friendly ties with Iran since the Revolution, and has never forgotten Iran's support for the liberation of its people,” he highlighted.

In a related front, in mid-December, Iranian Vice-President for Science and Technology Sorena Sattari visited South Africa at the head of a big delegation.

There Sattari said in a scientific meeting that Tehran is ready to share its scientific accomplishments with South Africa in the near future.

He voiced hope to share the country’s scientific achievements with South Africa in the near future.

In late April, Tehran and Pretoria, in a joint statement issued at the end of South African President Jacob Zuma's official visit to Iran, underlined the need for fast growth in expansion of ties and mutual cooperation.

Iran and South Africa underlined broadening their bilateral ties in different areas in their joint statement.