TEHRAN (defapress) – Donald Trump faces the prospect of becoming only the third US president to be impeached when open hearings begin this week into his alleged effort to bolster his re-election hopes by pushing Ukraine to find dirt on a Democratic rival.
News ID: 79251 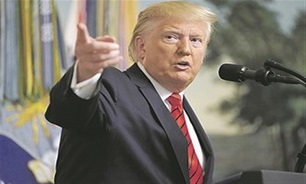 Democrats have amassed evidence — from a whistleblower complaint to the rough transcript of Trump’s July 25 call with Zelensky and testimony from a dozen witnesses — that the president abused his office by withholding aid and a requested White House meeting to force Zelensky into helping his personal political agenda.

“This is a very simple, straightforward act. The president broke the law, “Democratic Representative Jackie Speier said Sunday on ABC’s “This Week” program.

“This is a very strong case of bribery, because you have an elected official, the president, demanding action of a foreign country, in this case ... And he is withholding aid, “said Speier, AFP reported.

The hearings begin on Wednesday in the House Intelligence Committee, with the first witnesses two officials who have already provided evidence against Trump in private testimony: Bill Taylor, the top American diplomat in Ukraine, and Deputy Assistant Secretary of State George Kent.

On Sunday, Trump repeated his charge that the investigation is a “witch hunt” and that he did nothing wrong.

“The call to the Ukrainian President was PERFECT. Read the Transcript!” he tweeted.

“Republicans, don’t be led into the fools trap of saying it was not perfect, but is not impeachable. No, it is much stronger than that. NOTHING WAS DONE WRONG!”

But Democrats say the evidence against him is strong.

Once the coming Intelligence Committee hearings are complete, the Judiciary Committee can draw up articles of impeachment, or formal charges, against Trump.

Those would then be voted on by the full House of Representatives, reportedly before the end of the year.

Impeachment would likely pass the Democratic-controlled House. The case would then be sent for trial in the Senate, where Republicans dominate and support for Trump remains firm.

Coming just one year before national elections, and broadcast live, the impeachment hearings carry great risks for both parties and no certain reward, with the US electorate deeply divided and weary of Washington infighting.

Polls show a slim majority of Americans favor impeaching the president. But they also show that Trump’s sizable voter base, which delivered his shock victory in 2016, is so far impervious to the allegations.

Republicans who disapprove of Trump’s behavior suggest they will continue to support him.

“I believe it’s inappropriate for a president to ask a foreign leader to investigate a political rival,“ Republican Representative Mac Thornberry said Sunday on ABC’s “This week.”

“I don’t believe it was impeachable,“ he said.

“Most Republicans have said that would be a violation of the law,“ another Republican lawmaker, Will Hurd, told Fox News Sunday.

However, he said, they “have to truly consider whether impeachment is the right tool or not.”

The hearings are likely to be fiery, with Republicans determined to paint witnesses as biased against Trump.

They are prepared to disrupt testimony and shift the subject to the allegations Trump raised with Zelensky: that Biden protected his son Hunter’s allegedly corrupt relationship with a Ukrainian energy company, Burisma, and that Ukraine helped Democrats in the 2016 race.

No evidence has surfaced to support either claim, but transcripts from earlier testimony show Republicans pressing witnesses on both counts.

In closed-door testimony, the Intelligence Committee chairman, Adam Schiff, a veteran prosecutor, proved able to fend off disruptions and maintain a focus on the allegations against Trump.

But that could change in front of a national television audience. Republicans are moving one of their wildest and most agile counter-attackers, Jim Jordan, to the committee to joust with Schiff over control of the narrative.

On Saturday, Republicans said they want to call a number of witnesses relevant not to the charges against Trump, but to Burisma and 2016, including Hunter Biden.

Schiff made clear he will use his power as committee chairman to reject them.

“This inquiry is not, and will not serve ... As a vehicle to undertake the same sham investigations into the Bidens or 2016 that the president pressed Ukraine to conduct for his personal political benefit, “he said in a statement Saturday.

Republicans will also stress that Democrats have sparse direct evidence of abuse of power by Trump.

That has the executive and legislative branches in a constitutional showdown over their relative powers, with Schiff threatening to add obstruction to the impeachment charges against Trump.