First VP: US Sanctions No Obstacle to Foreign Tourists' Visit to Iran

TEHRAN (defapress)- Iranian First Vice-President Eshaq Jahangiri said despite the US sanctions and pressures to prevent tourist travels to Iran, tourism industry is flourishing in the country.
News ID: 79660 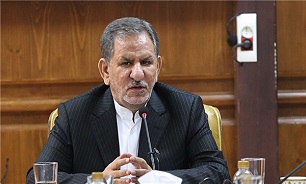 "The Americans think that they have been able to put an obstacle to foreigners' visit to Iran by sanctions but the number of tourists visiting Iran has increased 30% in the past two years," Jahangiri told reporters in the Southern province of Bushehr on Monday.

He added that nearly 7mln foreign tourists visited Iran in the past 9 months, saying that the number stood at 4mln tourists 3 years ago.

Jahangiri said that the tourism industry is a good source of revenue and can help the country with job creation at the same time.

Iran's Cultural Heritage, Tourism and Handicrafts Deputy Minister Mohammad Khayyatian announced earlier this month that millions of tourists had visited the country in the past few months despite the US sanctions.

"The tourism industry has not been hurt under sanctions and some 6mln tourists have entered the country in the first 7 months of the current (Iranian) year (started on March 21)," Khayyatian said.

He added that the US sanctions have failed to stop growth and flourishing of Iran's tourism industry.

Minister Ali Asqar Mounesan had said in September that his country’s tourism industry was enjoying a vigorous momentum, adding that Washington was unsuccessful in its efforts to dampen the growth in the field.

Iran’s tourism industry is on the right track and progressing well, Mounesan who is a vice-president said on the sidelines of his attendance in Parliament session for discussing the recent transformation of Cultural Heritage, Handicrafts and Tourism Organization (CHHTO) to a ministry.

“In 2017, the number of foreign tourists visiting Iran stood at 4.7 million. In 2018, the number reached 7.7 million, and we witnessed a boom in the first four months of the current year compared to the same period in previous years,” he added.

“Around March 2018, we received a governmental notice warning about the behavior of the US administration and its withdrawal from the Iran nuclear deal, so we started to plan accordingly so that the measures would not affect the number of tourists visiting our country,” Mounesan added.

He said one of these plans was to define new target markets.

“For instance, we implemented a one-way visa waiver with Oman. Recently, we did the same with China. From Oman alone, we received 4,700 tourists. The number has reached 12,400 tourists since the past three months,” he added.

“We have made plans and set our sight on regional markets. As of now, tourists visit Iran for receiving treatment, besides doing pilgrimages. This has brought in a lot of revenues for the country, even more so than revenues brought in by European tourists,” he said.