Following Path of God, Gen. Soleimani Had No Fear of Anyone

TEHRAN (defapress) – Leader of the Islamic Revolution Ayatollah Seyed Ali Khamenei praised the braveries of the former commander of Iran’s IRGC Quds Force, martyr Qassem Soleimani, and said he always followed the path of God and had no fear of anybody.
News ID: 79789 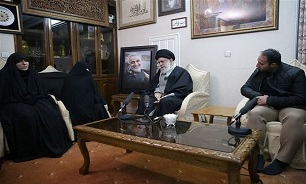 During a visit to Major General Soleimani’s home in Tehran on Friday night, Ayatollah Khamenei expressed sympathy with the family of the martyr and offered condolences over the martyrdom of “the sincere and exalted fighter”.

“Hajj Qassem had come close to martyrdom repeatedly, but in performing his duty and fighting for the cause of God, he had no fear of anyone or anything,” the Leader said.

Ayatollah Khamenei emphasized that General Soleimani was martyred by “the world’s most villainous individuals” namely the American officials, adding that their pride in this crime is a distinguishing feature of “the brave fighter”.

Ayatollah Khamenei also highlighted the popularity of the martyr and prayed for patience and calm in the hearts of his family members and all Iranians.