Inaction on US Crime to Embolden Aggressors 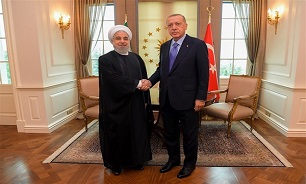 In a telephone conversation with his Turkish counterpart Recep Tayyip Erdogan on Saturday, Rouhani said, “If we do not take unanimous stance against America’s mistakes, a great danger will threaten our region.”

Appreciating the Turkish president’s sympathy to the Iranian government and nation after the US assassination of General Soleimani, Rouhani said, “Iran and Turkey have always negotiated on complicated issues.”

“We must respond to foolish acts, and there is no doubt that silence towards aggressors will make them bolder,” the Iranian president’s official website quoted him as saying.

“Martyr Soleimani had an undeniable role in the fight against terrorists in the region and you know well that he has carried out his great regional and Islamic duty,” the Iranian president told his Turkish counterpart.

Iranians are very angry about this US act, Rouhani noted, adding, “What the US did was a great foolish mistake and it violated Iraq’s national sovereignty and carried out terrorist acts in the Iraqi soil that were against the country’s independence.”

“The United States also carried out a state-sponsored organized assassination against another government and martyred our beloved and great military commander. If we do not take a united stance against such acts by America, we will be in great danger,” Rouhani said.

“We expect all our friends and neighbors to condemn this crime explicitly,” he emphasized.

The president also touched on the developments in Syria, saying, “Efforts will continue in the framework of heads of state of Iran, Turkey and Russia to help resolve the Syrian issue.”

The president then highlighted Iran's interest in developing bilateral relations with Turkey and said, “I hope we meet in Tehran soon.”

For his part, the Turkish president offered condolences over the martyrdom of General Soleimani, saying he was deeply sorry for the loss of the top general and that he understood the Iranian people’s resentment at the US.

“I am confident that the Iranian cultural and governmental structure, which is rooted in history, will manage this period of time by relying on its wisdom,” the Turkish president emphasized.

Referring to the talks between the foreign ministers of Turkey and Iran, President Erdogan said, “We will discuss bilateral and regional issues during our visit to Tehran in the near future.”

The White House and the Pentagon confirmed that the attack was carried out at the direction of US President Donald Trump.