TEHRAN (defapress) – Millions of Iranians have swarmed the streets of Tehran to call for revenge after US assassination of IRGC Quds Force commander General Qassem Soleimani in Iraq.
News ID: 79808 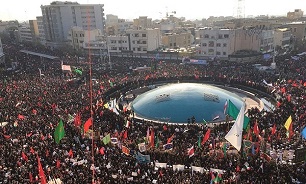 Soleimani will be laid to rest in his home town, Kerman, in south of Iran.