TEHRAN (defapress) – Leader of the Islamic Revolution Ayatollah Seyed Ali Khamenei on Monday performed the ritual ‘prayer for the deceased’ (Salat al-Mayyit) at the funeral of General Qassem Soleimani, the top Iranian commander assassinated in a US attack in Iraq.
News ID: 79810 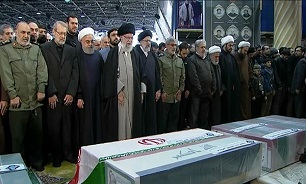 A huge crowd of Iranian people from all walks of life attended the funeral of the popular commander in the University of Tehran on Monday morning.

Ayatollah Khamenei broke down in tears several times during the ritual prayer for General Soleimani.

A funeral procession is being held in the streets of Tehran after the prayers.

Three days of mourning have been observed in Iran in honor of the iconic commander.

He will be laid to rest in his home town, Kerman, in south of Iran.